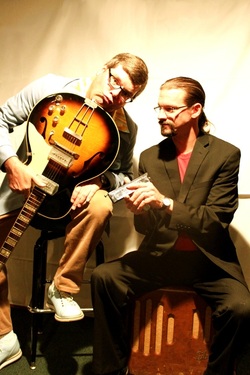 Andy “Mister” Wilson and “Johnny D” Davidson are a duo born of years of friendship and collaboration in Those Delta Rhythm Kings and Bad Gravy – two of mid-Michigan's most noteworthy blues bands. Separately, they have many recording and performing credits under their musical belts. Together, this stripped down presentation promises to elevate their individual strengths and make for some very enjoyable listening for true fans of the blues.

Andy is a musician's musician, avoiding actual work whenever possible. In addition to his harmonica, he plays several other instruments and has performed all over the U.S. He's a very talented musician, steeped in blues, jazz and folk traditions and possessing a keen sense of space and phrasing. Along with his posts in TDRK and Bad Gravy, Andy also performs as a founding member of the acclaimed Americana group, Steppin' In It, Celtic rockers The Lash and a handful of other groups. His harp influences are many, but the great Gary Primich and inimitable Little Walter hold special places in his pantheon of idols.

"Johnny D." is a collector. He collects vintage tube amps, all manner of guitars, cool clothes from second-hand outlets, and accolades for his guitar playing. He, too avoids actual work whenever he can. John is a tone monster, a master of the tasty lick, and a maharaja of rhythm. Possessing his own unique (and instantly identifiable) guitar "voice", his influences range from Charlie Christian to BB King, and from T-Bone Walker to Anson Funderburgh. His in-depth knowledge of old blues and jazz performers and his expansive collection of recordings have been a source of enlightenment and inspiration for all of his bandmates.

Together they pose a formidable combo, at once able to touch a listener's soul and also to smack them upside the head. Quite simply, they can play. To quote the legendary Jimmy Rogers: “Pull up an old orange crate and listen to some low down, dirty blues.” Enough said.